Library design is a very particular thing. It has to fit with the building in which it is contained, whilst also being adapted to the needs of both its users and those who work there. On top of the practicalities, it helps tremendously if the library is aesthetically appealing, making it more attractive to its potential patrons.

What’s more, libraries must continuously adapt to changing trends, needs, environments and use cases. Many libraries were built, quite literally, centuries ago and are now facing a world where digital content looks set to overtake print, and where all too many believe that they can conduct their research for themselves. We’ve discussed the concept of libraries moving from a space to a service before, but that doesn’t mean that the physical environment is any less important, nor any less inspiring. Instead, the library space must adapt to these changes as it continues to fight for the attention of its users.

The planet’s smallest country, Vatican City, houses one the most historical and beautiful libraries to be found in the world. The Vatican Apostolic Library was founded by Pope Nicholas V (1447-1455), with the first Cardinal Librarian being appointed by Pope Paul III in 15481. 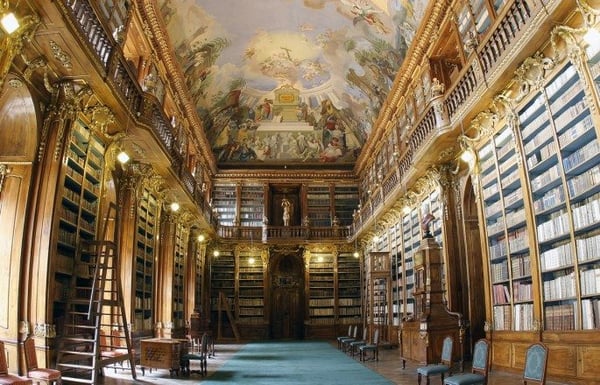 The trademark beauty of Vatican City flows into the Vatican Library too, with intricate artwork, elegantly carved bookshelves and sculptures galore dotted throughout the library.

When I lived in Buenos Aires, El Ateneo was one of my favourite places to visit. Although technically a bookshop, I couldn’t miss this magical place off the list. Housed in a former theatre, complete with the still intact stage, El Ateneo is a prime example of repurposing what would otherwise be a derelict building into something incredibly special, whilst still playing homage to its former use.

There’s quite a unique feeling surrounding this place, something to do with the stories that were once played out on the stage at the back, combined with the thousands of stories contained in the books on the shelves. Quite the combination. 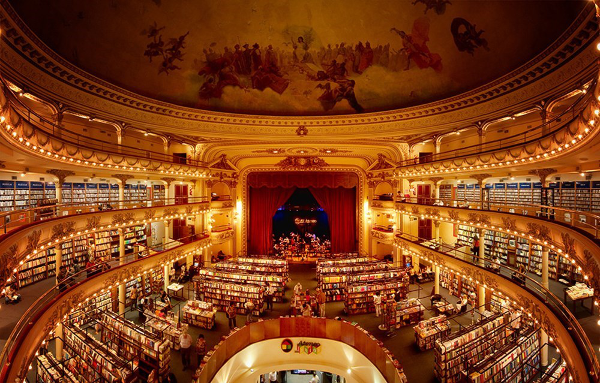 Senate House could arguably be one of the most imposing buildings in London. Rumour has it that Hitler had this magnificent piece of architecture earmarked as his headquarters should he successfully take over London. Luckily for us, that didn’t happen, and the Senate House now forms part of the University of London.

Located in the building’s grand tour, Senate House Library is a popular destination for students across the city. Not only does the library contain a wealth of resources - from its Latin American Collections to Palaeography and plenty more, but it is also one of the most homely libraries I’ve ever encountered.

On the library’s lower floor, through an unauspicious door, you will find a room filled with leather sofas and armchairs. The perfect antidote to any student’s dissertation stress, and a welcoming environment for a researcher to study the day away.

A popular backdrop in many the blockbuster movie, the New York Public Library (or rather, the Stephen A. Schwarzman Library as it is officially known) building is a destination in itself. Guarded by two giant stone lions, most commonly known as Patience and Fortitude, the library has a clear mission that will surely ring true with all Librarians and Information Specialists - “to provide free and equal access to its resources and facilities”2. When it opened in 1911, the NYPL held over 75 miles of shelves. These days, the collection has grown even more, with the library being expanded beneath neighbouring Bryant Park3.

Those who have visited Copenhagen will likely recognise the signature design of the city’s Black Diamond. What many may not have realised, however, is that not only does this striking building house a concert hall and many exhibitions but it is also the home of The Royal Library. 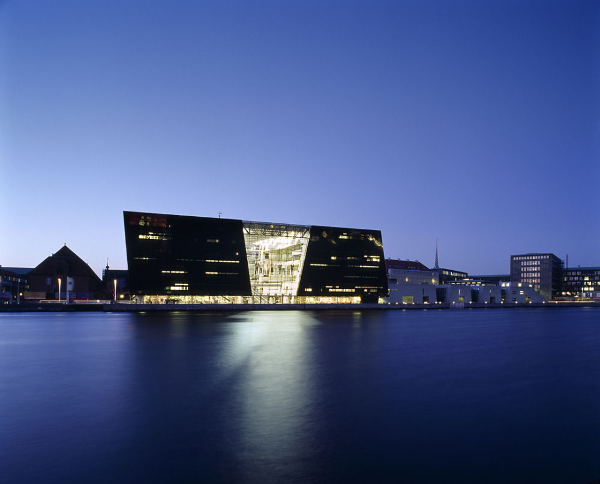 Built in 1999, visitors to the Black Diamond are greeted by a ceiling fresco from one of Denmark’s most renowned artists, Per Kirkeby, as well as stunning views across the harbour4.

Stuttgart City Library has a fascinating modern design. With staircases criss-crossing over the white open-plan space, Business Insider describes the design as imitating “the wandering thoughts of visitors”5. Incredibly apt for a building housing so many stories, ideas, and research. 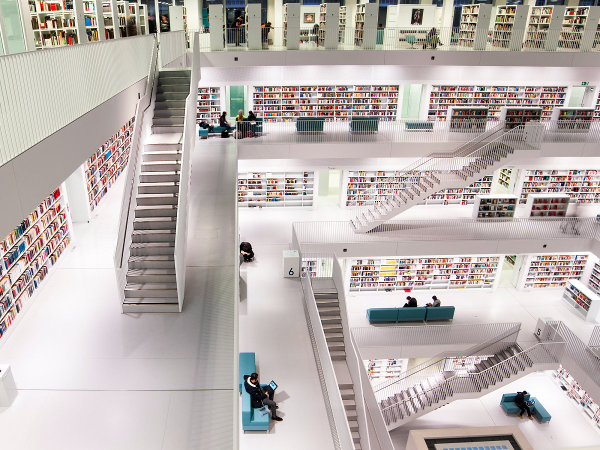 Though inherently futuristic in its appearance, the library is actually built on ancient foundations. The library’s core design is the same as that of the ancient pantheon6, which could be said to be reflecting the concept of building up fresh ideas following the research of our predecessors, quite appropriate for a library building.


Tell us, what libraries have inspired you?

N.B. The Vable blog is taking a short break for August. We'll be back in September - subscribe below to hear when we're back! Enjoy your summer.

The changing library: from a physical space to a service
6 examples of beautiful (and smart) library design
Libraries in the 22nd Century
Librarians as Knowledge Producers and Curators