What do information professionals actually do?

What does a librarian do? Most people have a vague idea, based on popular culture or outdated stereotype. And yet, there are some information roles which are so specialist and niche that they rarely enter the public consciousness. So as a legal information professional, how do you explain your job to people outside your field? Are you like a spy, a bassist, or a chef? Do you ever find it easier to explain your role by inventing parables or metaphors?

A Spy - teasing out those “unknown unknowns”

By far the most exciting comparison is the librarian as a spy. In Hollywood, spies are known for concealing themselves in the shadows, seeking out valuable intelligence that can change the course of history. Librarians aren’t really that different in terms of their relationship with information.

Valuable information doesn’t like being found. It often hides in huge, noisy crowds of data, or bides its time in old, long-forgotten books and servers. Finding it is an iterative process, often leading on from one clue to the next, slowly separating the signal from the noise.

There are threats along the way. Fake news and misinformation will throw you off the scent, so evaluate the validity and credibility of all your sources. Credibility is a fickle thing, especially in the age of social media where scandal spreads like wildfire. One dissatisfied client could have disastrous consequences for your company’s reputation - inaccurate information is a clear and present danger!

One of the most difficult elements of the librarian’s job is dealing with the “unknown unknowns”. This phrase has been criticised for its convoluted, nonsensical logic. Yet that is precisely why I highlight Mr. Rumsfeld’s most notorious quote: It encapsulates the complexity of identifying information before you realise its relevance. Librarians, like spies, develop a sixth sense for this type of information, being able to assess and categorise information which hasn’t found a use yet. This is the most valuable information.

A Chef - combining separate ingredients into a single experience

The presentation of information is almost as important as the wisdom contained within it. Think about it: a noisy page with lots of ads, different font sizes or images of cute cats flashing at you incessantly is a mess, making it really hard to focus on what matters most. Librarians need to think about making information easy to consume, enticing the reader from one titillating morsel of information to the next.

Curating information is a bit like cooking for a Michelin-Star chef. Simply substitute artichokes for articles, think of pots & pans as information management tools and serve it in a newsletter instead of a dinner table. To my mind, these two professions share three principles in delivering their work: aesthetics, sequential arrangement and quality over quantity.

Aesthetics matter almost as much as substance. Beauty, simplicity, purity... it may sound far-fetched, but librarians take great pride in making their information look good. The way the reader’s eye hits the page (or in most cases, the screen) already conditions the reader’s “appetite” for information. They do say that “the eyes eat first”.

The sequence is important because separate entities can tell a different story depending on how they are arranged. A little amuse-bouche opens the appetite, exciting you for the meal to come. Intense flavours follow on from light ones, while Champagne pairs well with oysters but not with blue cheese (try a Sauterne for that…) A meal is orchestrated from beginning to end, almost telling a story in itself. Similarly, you make information more easily digestible by ordering it cleverly. Context comes before specifics, related articles can be grouped into Topics, and important news is prioritised at the beginning of a newsletter.

It goes without saying, but quality trumps quantity every time. Your audience simply doesn’t have the time to read every single article in the world and hope that something relevant sticks. Haute-cuisine celebrates small portions, focussing your attention on what’s there, the important stuff. And we all know what happens when you eat too much: you fall asleep. And that’s the last thing a librarian wants to achieve. Less is more in the world of information curation.

A Bassist - the glue that holds it all together

Ahh, I’m sure we all know a bassist somewhere. At least, I’m pretty sure we know the bassist stereotype: quiet, understated, a bit of a nerd perhaps. Some people even dismiss bassists as a “demoted guitarist” who only “plays one note”; essentially a superfluous band member who only got in out of sympathy or because their father had a large van and could drive the band to gigs. Whereas the lead singer gets all the adulation, sometimes the bassist is overlooked entirely.

I used to play bass. It was a mediocre Berlin rock band, and yes, most people found the other band members more interesting. But in a sense, that is where the bassist’s magic lies. Being in the background allowed me to focus on what really makes a band groove: prompting harmonic changes, underpinning certain rhythms and keeping the band on tempo - being in the background gave me the oversight, allowing me to concentrate on keeping the band “in the pocket”, as they say. 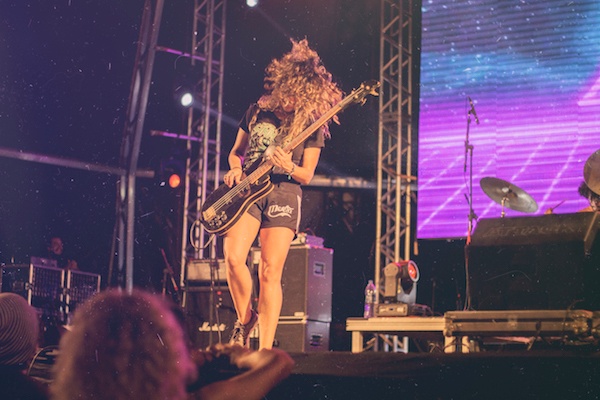 The bassist’s quiet, unassuming vibes may resonate with some librarians. We don’t necessarily grab the headlines, and sometimes people struggle to see what it is we actually do. The librarian’s world is often one of discretion - allowing the words, articles and books speak for themselves, as it were.

The greatest bassists will make themselves noticed through their absence: when the bass stops, the song seems to stall. Similarly, the essential part librarians play in your organisation will only become apparent if librarians would not show up to work for a day. Sensitivity, stability and steadiness are what keeps the whole group unified, the glue that holds it all together.

Do you agree with these comparisons? We want to hear your own analogies and metaphors.